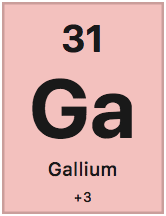 Sidekick Minerals assist the main nutritional minerals by stabilizing and calibrating them.

Gallium in its +3 state can substitute for ferric iron (+3), in some but not all of iron's roles.

Our bodies expect gallium in natural proportions with iron. Signalling for iron may depend on the usual presence of a proportion of its usual sidekick, gallium.

What happens when we eat iron supplements, iron-fortified grains, iron multivitamins, and so on — without the usual proportion of gallium?

Gallium and the other Sidekick Minerals provide a great reason to get your minerals mainly from organic ancestral wholefoods, grown on rich soils, in Nature's balance; not from a bottle or from chemicals added to processed foods.

There are more minerals with great importance than those within our present state of knowledge. Our bodies (and livestock and plants) expect the minerals in Nature's proportions — even the minerals we don't know much about yet.